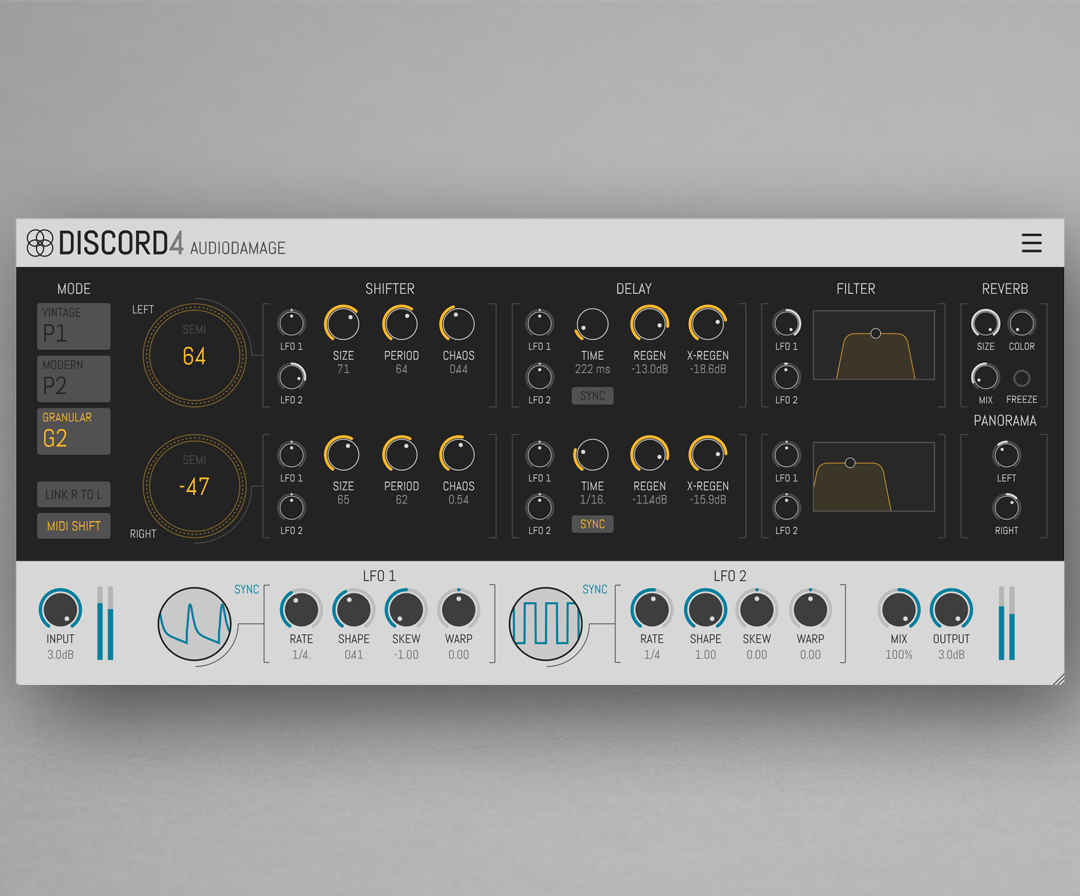 Sept 10 2019 | 18.6 MB
Discord4 is the latest version of our most popular and long-lived product, our Discord stereo pitch shifter. Originally modeled from the H910, Discord has long since become its own effect and a studio standby, and this version includes major additions to further stretch its capabilities.

The pitch-shifter consists of three separate algorithms: a "vintage" mode (the original Discord algorithm, modeled on the Eventide H910 and H949), a "clean" mode for more modern shifting sounds, and a "granular" mode for experimental effects. Each mode has its strengths, depending on the input material, and Discord3 has a broad palette of capabilities as a result. The P1 and P2 algorithms have full control over the buffer (window) size of the shift effect, for fine tuning the shift to the input signal, or for stranger sound effects. At the extremes of the six-octave shift range, some truly strange aliasing and artifacts can be had with this control.

Discord4 retains its pair of tempo-synced delays and bandpass filters from previous versions, and adds a reverb in the feedback loop (for easy access to "shimmer" effects). We have also replaced the modulation sources from the original with our all-new FLFO (Flexible LFO) design. Panorama controls are included to control the stereo width of the wet signal. Finally, soft saturation and limiting have been added or improved throughout the signal path, for an overall improved sound and added vintage-style warmth, and to allow for extreme feedback experiments without fear of overloading your DAW's channel.

• Buffer Size Control: The P1 (Vintage) and P2 (Clean) algorithms have a Buffer Size control, from 32 to 2048 samples, for fine-tuning the pitch shifting effect.

• Delay: Tempo-synced or free-running delays with feedback, cross-feedback, and a sophisticated bandpass filter.

• Reverb: A simple stereo reverb is added to the feedback path, for "shimmer" effects and further sound exploration.

• Modulation: Two of our new FLFO (Flexible Low-Frequency Oscillator) with tempo sync and an arbitrary waveform, capable of a nearly infinite number of modulation shapes using only three controls.

• True Stereo Operation: Discord4 has a true stereo signal path, with entirely independent control over each side, finishing with panorama settings for stereo width.

-- Rebuilt with all current SDKs and APIs (mainly to deal with Notarization on macOS and the somewhat fluid nature of the current VST3 situation.) Stability improvements and overall embettering.
-- 32-bit version removed from macOS to maintain compatibility with current macOS SDKs. macOS version is now 64-bit only; Windows version currently remains available as 32-bit, but you should prepare for the inevitable.